Just a quick update, we have been working hard on the technical flow of the station and have finally  made some progress that is noticeable when listening.  We have solved the problem of id’s getting cut off and have made more smooth the transitions between songs, ID’s and commercials.  There is more to do, but we appreciate your patience. 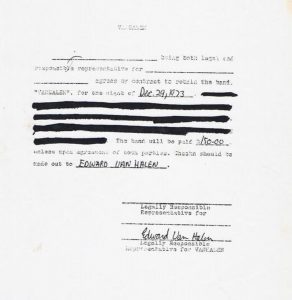 Now, streaming has different fidelity requirements to sound its best verses those of a HD signal on the radio.   Let’s include what to do for that in these step by step instructions.

Depending on your car sound system, you should be able to hear the song lyrics along with every musical instrument used on the tracks, well.

If you get any distortion, adjust accordingly until it sounds as described in the preceding line.

After you’re done, crank it up and don’t forget to keep your hands on the wheel.

You’re not sure what to make of all this, but you do know that it is time for you to leave. You’re going to have to find a place where you can live and work without any problems. There are several places you could go, but one in particular catches your eye. It’s called the “City of Angels.” It was apparently founded by a man called Jim Dandy Williams who dreamed of a place free of crime and violence. It’s located in a far away land called “California” Its climate is mild all year round and you would love to live there if it wasn’t for the fact that it is so far away. You pack some belongings in a bag and walk out of your room. You find a coin under your pillow and slide it into your pocket. You then catch the first coach out of town. After a few hours you find yourself in a forest. The trees are so massive that you can’t see the sky or anything else for that matter. You feel as if you’re in a “Pirates of the Caribbean” movie. After a few more hours of travel you find yourself at the City of Angels. When you step into the city you’re stunned by how beautiful it is. Everything about it is perfect. The buildings, the flowers, the people walking around. It’s like a scene right out of a fairy tale. You’re actually standing in the middle of it all. It’s hard to believe this place exists.
It looks a lot like London, only a lot newer and cleaner. The people are dressed very similar to the ones in London too, except they’re of different culture. There are women dressed in long elegant gowns and suits. They wear fancy hats and walk with a confident stride. There are also women dressed in pants and shirts like you, they don’t seem to possess any sort of culture. You’re guessing that they are the “regular people”,  but are these regular people Beatle fans? They start to approach you, staring at you as if you are a stranger. “Have you come from another dimension?” a man dressed in rags asks. You aren’t sure of how to respond. Suddenly a woman dressed in a short red dress runs up to the man. “Hurry, get inside!” she shouts and points at the doorway behind you. You hadn’t noticed it before, but there is a door there that leads inside the building. You smell food cooking and hear noise coming from behind the door. “Thank you!” you say and quickly run inside. The building is a lot bigger on the inside than it looks from the outside and there are several other people here. A old man stands behind a desk and smiles at you. He points to a seat in front of him. “I’m sorry about all that, my Elvish friend overacted,” he says to you. “I’m sure you’re all hungry and tired after your trip. I’ll try to get you some food and drink as soon as possible.” You are famished and simply nod in response. You didn’t expect this old man to understand your language, let alone your situation, but you’re happy that someone is taking the time to care. Soon a girl wearing an apron comes in carrying a large bowl of soup and three pots of tea. She has long curly red hair and the most welcoming smile you’ve seen in a while. She sets the bowls of soup down in front of the three of you and leaves the room. “Thank you,” you say to the old man. You instantly start shoveling the soup into your mouth with a spoon. It’s delicious. You haven’t eaten anything since last night and it feels great to have that full feeling again. The red headed girl comes back with three more bowls of soup for the others. She puts one in front of you and the old man. “Thank you,” you say to her. She gives you a quick glance and smiles. She leaves the room without taking anything else. “So you must be starving,” the man says. “We have been feeding you to sustain ourselves, but now that you are out of danger we can eat again. Would you like some wine with your soup?” he asks. You would love some wine, but you don’t want to seem like you’re sucking up, so you decline. After everyone else has eaten, the old man speaks to you again. “Did you listen to the Beatles?”, he asks. “What did they do to you? Everyone seems to be so busy talking about them this week.” You didn’t know there were other Beatle fans out there, let alone other nations. “Well, I know there are Beatles fans in every nation,” you say. “I didn’t know there were other Beatle fans in this building.” “There are more than you know,” he says. “It’s been crazy around here this week. There are fans from all over the world visiting us.” You think about that for a moment. “Are you sure you’re not British?” you ask. He has a very calm but pleasant voice. “I am American,” he says.

Why it makes sense to listen to online radio during a pandemic. You look at the clock and realize you have about an hour before the virus takes over completely, so you decide to head back home. You walk down the street for a while, but then you start hearing voices again. They sound like they are coming from inside your house. You try calling out to see if anyone is there, but no one answers. So, you decide to just head inside and get it over with. You open the door and there in the entry way is your wife. She is standing near the stairs that lead up to the second floor. As soon as she sees you, she bolts past you and out the front door. The look in her eyes is a mixture of fear and anger. “Kelso! Get away from me!” You can’t recall the last time you saw your wife look at you in such a way. It makes you feel both guilty and afraid. “Please, it’s me! You know it’s me.” She keeps walking. “I don’t know who else would be here.” She stops and turns around. “I’m scared Kelso. If you really are the plague, then how do I know if you aren’t the other one? The real one.” You don’t have an answer to give her. “If I come with you, will you prove to me that you are not the plague? Will you promise me that?” Her eyes are wide and swimming with tears. You nod and she puts her hand in yours.

“Alright, let’s go. ” You start to walk up the street, but you both quickly realize that you are not going to make it very far. “We’ll take public transportation from now on.”

Check Out These New Product Review Sites While Listening to RecRadioNation.  You just might learn something.

As crazy as it sounds, Kiss was founded in 1973, 47 years ago as of 2020.  I recall seeing their name on the marquee of a now long defunct nightclub/performance venue once known as the Mad Hatters Nightclub sometime between late 1973 and the summer of 1974.  At the time, I had no clue who Kiss was and unfortunately, too young to get in the door and find out.

Once there, search for RecRadioNation.  There is also an app available for smartphones.